A Beginner's Guide To Peppermint

by blog optimumhealthvitamins on September 30, 2015 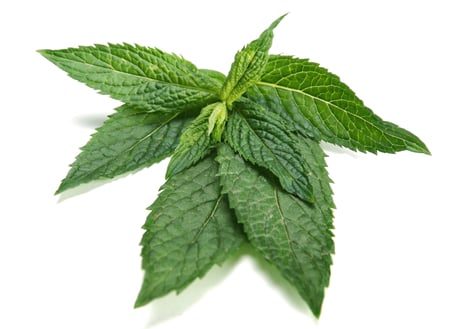 *Peppermint is a hybrid of two other plant species; spearmint (Mentha spicata) and watermint (Mentha aquatica)

Peppermint can usually be found in warm, moist climates, near bogs or on the banks of a stream. It is said that it is best that “harvesting should be carried out on a dry, sunny day, in the late morning, when all traces of dew have disappeared”.

Every plant, just like every living thing, has a constitution: hot or cold, wet or dry.

*Peppermint is: cold and dry (note that the constitution is opposite to the climate it likes to grow in), cooling and drying to the human body.

**This may mean that if you are prone to cold extremities and tend to be extremely dry (eyes, skin, and hair) this herb may aggravate your constitution further. When looking for an herb it is always wise to see if it matches your constitution (then you may not want it) or is opposite to your constitution (then it may compliment your needs). I do have to mention that just because an herb may have the same constitution as you, doesn’t mean you have to immediately rule it out. For instance, if you are cold and dry and peppermint is cold and dry, you could pair it with a little ginger or cayenne, which are both warm herbs. This will allow you the benefits of peppermint without it colliding with your body type.

In modern society, peppermint is most known for flavouring candies, breath mints, and mouthwashes, among other culinary uses. In the past this herb was readily found in the folklore and myths of many countries. Throughout time, peppermint has played a role in both the spiritual beliefs as well as the physical aspects of various societies. Even though it plays a key role in some consumer products that have nothing to do with one’s health, its medicinal and spiritual qualities are something that should not be overlooked.

A Greek myth states that the Greek God of the dead by the name of Pluto, loved a nymph named Minthe. Persephone, Pluto’s wife, grew so jealous of his affair that she turned Minthe into a plant, and Pluto feeling bad about Minthe’s fate bestowed upon the new formed plant a pleasant aroma that would later be described as mint.

• Thousands of years ago in Egypt, peppermint was buried with the deceased to protect them on their journey into the afterlife or what they referred to as a “kingdom”. It was also used in this time as a digestive aid.
• In Greece and Rome, peppermint was used under pillows to bring the sleeper good dreams and it was also rubbed on walls, furniture, and floors to purify the space and to give the room a clean odour. They also used it during feasts to stimulate appetite or to relieve fevers, headaches, colds, and digestive complaints.
• The Greeks also believed that misfortune was brought to those who rooted out a mint plant.
• In the older Asian cultures, rolling peppermint in a scroll that was to be passed on to someone else was considered a sign of friendship and love. They too used the herb for digestive purposes.
• A little later in history the people of England believed that eternal happiness could be found by finding a peppermint plant that was flowering during the mid-day. They too used it for digestive complaints and to freshen breathe.
• The French believed that carrying peppermint with St.john’s wort would ward off evil spirits.
• In Italy, folklore stated that peppermint protected children from sickness, and evil spells.

All of these folk tales highlight, in one way or another, the spiritual aspects of the herb. In some cultures this plant was so highly regarded that it was even used as payment for taxes.

• When enjoyed as a warm tea, peppermint heats the core body temperature, which in turn brings your blood outward closer to the skin and causes you to perspire, cooling you off.
• Tea: heart palpitations, relaxing the stomach lining, lessens gallbladder spasms, increases bile production (help digest fats), said to help break down gallstones.
• Lozenge: easing the stomach, bronchitis, laryngitis.
• Externally (as an oil or hydrosol): headaches, sunburn, itching, bug bites/stings, mosquito repellent, and a good natural pain killer (cools and numbs nerve receptors).
• Flower essence: though it does not actually contain any physical portion of the peppermint plant, helps one “digest everything that is difficult” in their life and that it is good when one is feeling the deep emotions of the challenges in their life. Giving one insight into the issues they are facing presently, or patterns that they may have had since birth, that are non-conducive to their current situation. It is said to focus on the issues that are held in the stomach and digestive area of ones being, and in turn strengthens the individual so that they are better able to cope with those issues (www.livinglight.com).
• Also useful for: toothaches, mouth sores, anxiety, asthma, insomnia and rheumatism.

One famous European herbalist, Nicholas Culpeper, even mentioned how peppermint is not only useful as an aid for digestion, but can also be used a remedy which is “helpful to wind and colic”.

• Italian women used peppermint to keep milk from spoiling, before refrigeration was available.
• To ward of rats, since the rodents can’t stand its smell.
• Egyptians used it to make perfume, and it is still used that way today.
• Many diverse culinary uses.

Ways to use peppermint:

• My personal favourite is as a tea.
• For colds and the flu it can be made into a pleasant tasting lozenge.
• To clear nasal passages peppermint can be used as an inhalant (essential oil, not for internal use).
• Externally it can be used as a cream, ointment, or hydrosol depending on the individual’s preference.
• Hoffman states that it can be taken as a tincture at a ratio of 1:5 in 40% alcohol, which is usually the most potent way to take a herb.
• It can be taken in capsule form, but the plant oil must be in an enteric coated capsule to prevent it from being released into the stomach and irritating the system.
• This plant is also one that is safe to eat fresh.

This herb is ideal because it does not have any drug interactions. Just be sure that you are not allergic to the plant. Peppermint should not be used internally with people who have over acidic stomachs, GERD, or gastric ulcers as it may aggravate the condition further. It should also be avoided by infants or small children, unless in a flower essence or homeopathic form, as the menthol can be too powerful for them. As far as using it externally it should not be used on broken skin or in the presence of a heating pad and try to avoid getting it in your eyes.

This article was written by Marley Vankasteren, Holistic Health Practitioner