Health Freedom Update: the suit against Health Canada and the NHP Regulations

by blog optimumhealthvitamins on February 12, 2014

Many who are frustrated because they can’t get the NHPs they want have been asking how the suit against the Natural Health Product Regulations is going. As of January 21/14 there is an update to report. But a little background first:

After the Statement of Claim against the NHP Regulations was filed by Natural Health Freedom Canada in September of 2012, citing numerous Constitutional violations, violations of our Charter of Rights and Freedoms, and violations of the Canadian Bill of Rights, as usual, Health Canada came back with a “Motion to Strike” to try to get the case thrown out. In turn, the plaintiff’s lawyer, Rocco Galati, responded with a Motion to Stay the Regulations, pending the outcome of the case.

For the Government’s motion to succeed, they needed to prove that the suit against them was “frivolous and vexatious” on all pleadings. Alternatively, if they were unable to demonstrate this, the Motion to Stay would be considered, and the enforcement of the Regulations may be suspended until the case is decided.

In December 2013, well over a year after the claim was filed, the dates of Jan 21, and 22nd, 2014 were set to hear these respective Motions. Surprisingly…or not… immediately after these dates were announced, financial audits were triggered by CRA on all three of the case’s Plaintiffs. A dirty bureaucratic play? Yes, without question, but also one that showed that Health Canada saw validity in the claim against them.

So, on Jan 21st the Motions were heard. Yet the Government’s arguments that the claim was frivolous and vexatious were so inadequate, that instead of a full day, they only took hours to be heard by the Court. Witnesses described Health Canada’s arguments as “grasping at straws.”

The Health Canada lawyer was even paraphrased at one point as asking the Judge, “Are people supposed to just be able to take what they want?”  Though the Judge didn't respond, when it comes to safe natural products, which have cause zero deaths in Canada, the obvious answer would seem to be “Yes”. After all, 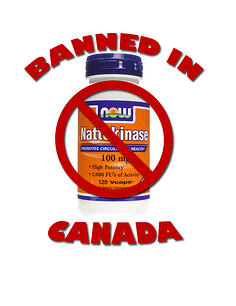 what we are talking about are Canadians who were relying for their well being on safe natural health products they can no longer get because of the Natural Health Product Regulations...and their health is being negatively impacted. How can that be construed as frivolous and vexatious, especially when by all appearances these Regulations blatantly violate our Constitution, and often have absolutely no basis in science or safety? For example, Nattokinase from fermented soybeans was pulled from the market not because of even a single adverse event, but because it safely and effectively prevents the formation of blood clots, without thinning the blood*. Who benefits from its disappearance? Certainly not Canadians. The only benefit is a competitive one for the pharmaceutical industry. After all, nattokinase competes with countless heart and cardiovascular medications.

There is not a single study in existance that shows that 10,000 I.U. per day, or less has any negative effects at all. And there are countless thousands of studies demonstrating the benefits of topping up your vitamin D, and the detriments of being deficient, (which is especially likely in Canada). So why the limitation? Such regulations are at the expense of our health and well being, and the only benefit is again to the pharmaceutical industry in increased revenues.

Next, it was Mr. Galati’s turn, and he reportedly did a masterful job of presenting the plaintiffs’ case. Though estimates are that we may wait one to two months for the decision of whether any of the arguments will be stricken, or the Regulations stayed, the Judge described the case as “very interesting”, (i.e., there is a lot of merit in the plaintiffs’ arguments). In the end, either scenario is unlikely to be granted in its entirety, and the case will very likely proceed to court. So the decision on whether Health Canada has acted legally or not, and / or is liable for their actions may still be a long way off.

Good Canadian citizens always assume that since the Government makes our laws, it would never do anything illegal, or morally wrong. But as this case shows, it’s the Constitution that determines what is legal or not, and by all appearances the Natural Health Product Regulations are in flagrant violation of it. We will see whether the Judge agrees.