How Your Face Reflects the Health of Your Organs

A lot of people grow up being taught that pimples and skin disorders like eczema are strictly a skin issue and need to be treated with medicated moisturizers and chemical weapons that would put a military to shame. Television commercials reinforce this idea with blemishes being zapped away by wands and creams, rather than looking at the deeper significance of what skin issues point to. 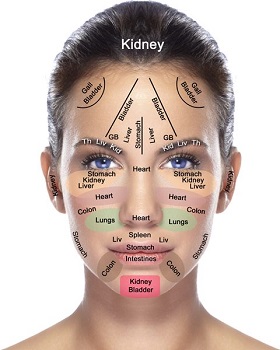 The skin is an organ itself. Not a barrier. And it is considered by the immune system to be the most peripheral organ meaning that, as opposed to something like the heart or the brain, the skin is relatively secondary to survival. Of course, its selective permeability is our first line of defense against infections and harmful bacteria, however, a significant cut on the skin is not the same as having a hiccup in your heart beat or electrical malfunctioning in the brain. As such, the skin is often the first place where internal issues show up because it becomes an instant storage facility for excess hormones, toxins and inflammation.

The skin should be viewed as an immediate red flag, particularly the face – the body's way of telling you that something is not right internally and needs to be taken care of. Similarly, if you have ignored a skin disorder for quite some time and it seems to have gone away but you have developed other issues as a result such as a chronic cough, joint issues and so forth, the seat of inflammation and disease may have moved further into your cells and can be affecting more vital organ systems. This is the basic theory of homotoxicological disease.

In Traditional Chinese Medicine, acupressure techniques and other reflexology methods, the image below is the basic breakdown about what areas of the face correspond to which facial organs. Once you are able to determine which area of the body is actually manifesting symptoms through the skin, you can consult a health care practitioner for recommendations to help support that body system. For most clients, this results in their skin clearing up in that region of the face , and a deeper assessment and understanding of what is happening in their bodies.