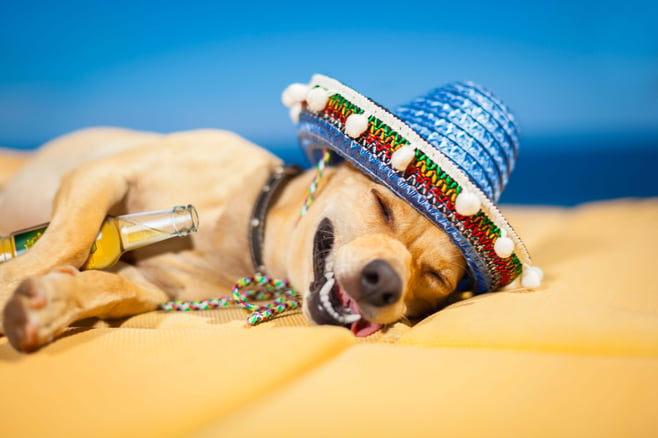 Whether on vacation, at a wedding, out at the lake, or by a night campfire, like it or not, the fact is that people tend to drink more alcohol during the summer. And even though there are things you can do to lessen a hangover after the fact, you are MUCH more likely to have success with hangover prevention by taking a few simple steps before embarking.

Be clear that I am not advocating drinking to intoxication, (note the word "toxic" in the middle), but rather trying to be realistic about what many people choose, and providing suggestions to get the benefits, with less detriment. Of course, if you drink enough there are few things that will avoid the downsides....but there are still supplements that can help minimize the damage.

Though taking the following supplements immediately prior to, or while drinking will certainly help, our experience has shown that particularly some of the herbal formulations will be most helpful taken 45-90 minutes prior to your first drink to give them time to get into your system.

1. Support Your Liver by Raising Levels of Glutathione

When it comes to protecting yourself from the toxic effects of alcohol, it is all about metabolizing and detoxifying, and then minimizing the oxidative and inflammatory damage from the by-products. Glutathione is central to every one of these tasks....specifically in its reduced form,

Though some detoxification of alcohol occurs in other tissues, the main burden for metabolizing it still falls on the liver. Alcohol is first converted into a reactive, nasty substance called acetaldyhyde, and then it is reacted with glutathione to form acetate...(similar to vinegar). This is all fine and good until your Glutathione stores run out, (which can happen quickly), and then acetaldehyde is left to run amok in your tissues generating free radicals, and promoting inflammation. Hence, building up your glutathione stores first before drinking more than a moderate amount of alcohol is of primary importance.  Though this may sound complicated, it can be pretty straightforward. 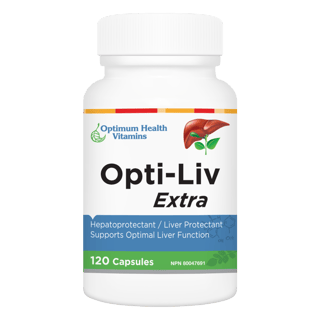 For example, though the ingredients in Opti-Liv Extra provide broad support for liver function, the main thrust of this formula is to increase and spare your stores of glutathione. Milk thistle (standardized to 80% silymarin) is well known for it's liver protective and regenerative properties, and it will also boost glutathione concentrations in the liver by up to 35%. The same goes for Schizandra, also known for its stress and hormonal balancing qualities, and Alpha-Lipoic Acid, which in addition to raising and sparing glutathione, is an extremely potent fat and water-soluble antioxidant in its own right.

In addition, NAC, or N-Acetyl-Cysteine in the formula acts as a direct glutathione precursor so you make more. This is why NAC is administered in hospital emergency rooms for liver failure, a situation most commonly caused by the drug acetaminophen, AKA Tylenol....(see side note below.)

Lastly the Opti-Liv formula is rounded out by the mineral selenium, which is a necessary precursor for the extremely important antioxidant family of enzymes known as "glutathione peroxidases", critical for protecting your membranes and genes by taking free-radicals out of commission, before they form even more damaging ROS (Reactive Oxygen Species), such as hydroxyl radicals.

Using Opti-Liv Extra for the purpose at hand, I would take 3-4 capsules, preferably at least 45 minutes or more before your first drink.

Another option for raising glutathione is to supplement it directly with Liposomal Glutathione, (such as Readisorb TM), which is absorbed intact in its active form. Other powder forms of reduced glutathione are broken down by the gut after being swallowed. In this case you "swallow the car, absorb the parts, and hope the car is reassembled on the other side". The limiting factor for liposomal glutathione is the price...it is quite expensive, and I find that the botanicals mentioned provide a broader range of benefits. Still I have seen this form of glutathione work amazingly well for some very serious liver and neurological conditions.

Side Note: Normally Acetaminophen is detoxified using glutathione. But once your glutathione stores are exhausted, an alternate detox pathway kicks in that forms an extremely toxic liver metabolite called NAPQI. Your glutathione stores will run out even more quickly if you are consuming alcohol at the same time, so acetaminophen is a very bad choice of pain-killers when you are drinking....or recovering the next day.

Alcohol can act as a potent diuretic, and cause large net fluid losses. Along with lipid peroxidation and inflammation, dehydration can be largely responsible for a hangover headache, and many deleterious effects. Obviously, one of the things you can do to minimize the dehydration is to consume lots of water during and immediately after drinking.  Also remember that coffee can intensify this diuretic effect. Yet water isn't the only thing flushed with all that urination. You also
lose large amounts of water-soluble vitamins of the B-complex family and vitamin C, as well as electrolytes such as potassium, sodium, magnesium, and calcium.

The B-Vitamins, particularly Folate, B-12, B-6, B-2, and Betaine, besides being directly involved in many neurological processes and energy production, are necessary to carry-on the process of methylation. Methylation is a critical biological process for an extensive list of bodily functions, including glutathione production and recycling. If you are not methylating properly, you are likely to sustain damage from even small amounts of alcohol!

Vitamin B-1 (Thiamine) also plays a vital role in brain and nervous function, and is specifically depleted by alcohol. In fact the neurological deficits typical of chronic alcoholics are thought to be largely due to thiamine depletion. And Vitamin C, being a primary water-soluble antioxidant, and cofactor for several powerful antioxidant enzymes that are protective against alcohol's deleterious effects, (such as SOD - super-oxide dismutase, catalase, and GPx -glutathione peroxidase), will also be disproportionately eliminated with excess urination.

To replace B & C vitamins you can use just a basic stress tab, and that will work pretty well for those that properly convert the B-vitamins to their active forms. But for many who don't make these conversions well, you may want to use Natural Factors Active B Complex with the active co-enzyme forms, plus some vitamin C before or during the party.

(An even better option is to use CanPrev's Immuno Multi, combined with Optimized Methylation Factors, so you get some minerals in, as well as protective anti-inflammatory phytochemicals, and some vitamin E...important to protect the fat-soluble membranes concentrated in the liver and brain. But this may be "too much fuss" for many.)

Depending on how much you drink you may, or may not, need the extra support provided by the protective botanicals in formulas like Optimum Health's Opti A.I. Extra. But to quell the oxidation and inflammation from the metabolic leftovers before or after a night of excess, Opti A.I. Extra or similar formulas can be invaluable.

Once more, the herbs contained in this formula activate a profoundly protective pathway within our cells called the Antioxidant Response Element, (ARE), which stimulates production and activity of the protective antioxidant enzymes discussed above...and many more. (Over 200 beneficial genetic responses in total.

Even the Collagen Type II in the formula supplies hyaluronic acid, which helps your skin and connective tissues retain moisture, and reduces inflammation within the intercellular matrix...i.e. the very active frameworks between your cells, which are also prone to dehydration....and wrinkling.

An effective dosage for protection would be 3 capsules taken prior to, and if necessary repeated at the end of the night.

Side Note: If you like garlic, consuming it in a meal, preferably before you partake, can also be helpful. It is a Nrf2 activator, and can specifically neutralize acetaldehyde.

If you've got melatonin around and can remember to take it before retiring at night, it can offset toxic effects from a wide array of chemical insults. This includes alcohol and its metabolic residuals. Melatonin is an extremely potent fat and water-soluble antioxidant and Nrf2 activator that can penetrate all of your tissues, and provide generalized protection. According to Russell Reiter, discoverer of melatonin, and author of Melatonin - Your Body's Natural Wonder Drug, alcohol blocks production of melatonin. In addition to removing a potent natural defence, this interferes with your circadian rhythms, setting you up for hormonal disruption the next day. 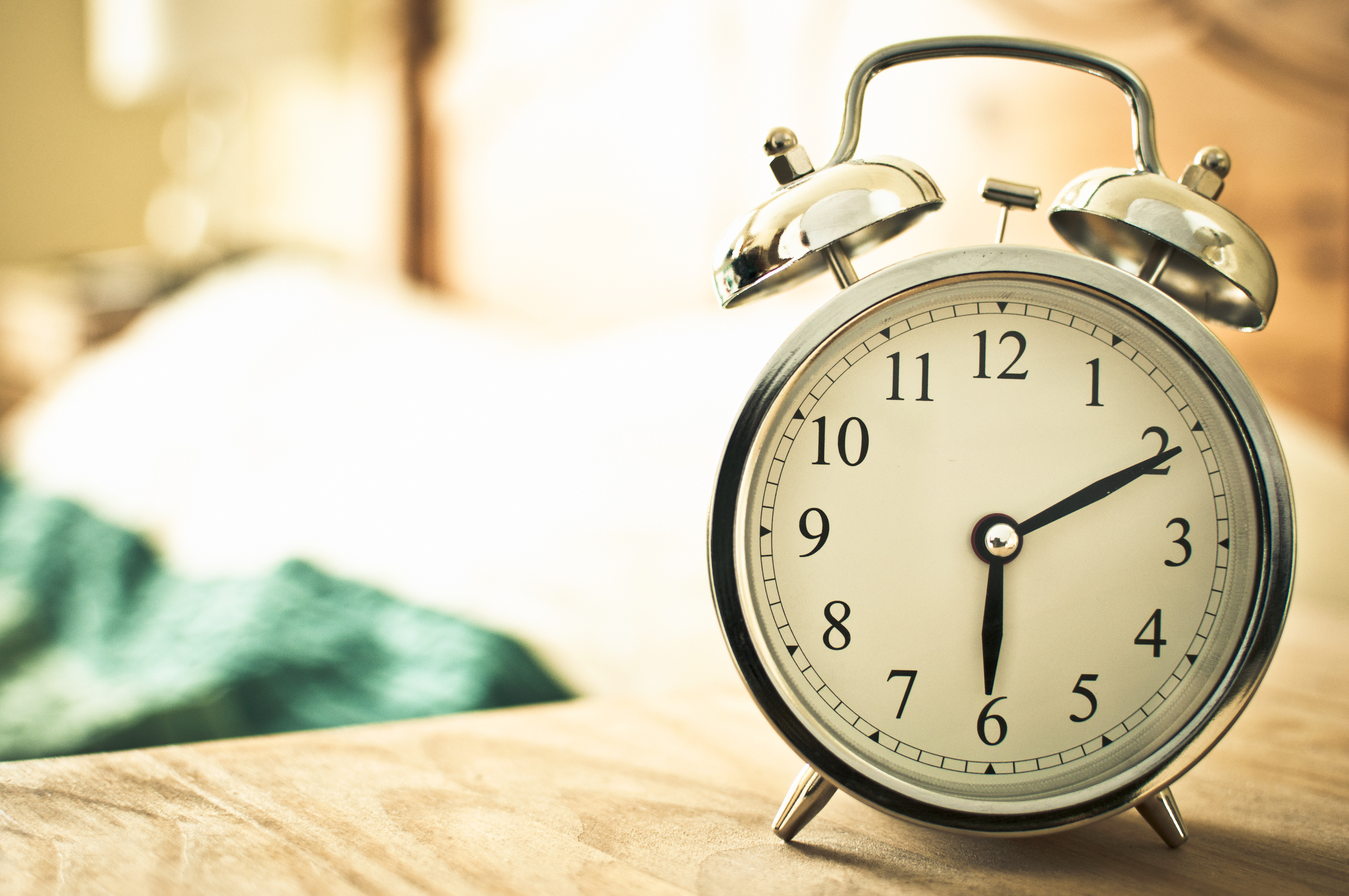 If you find yourself in the unfortunate situation of waking up with a pounding head, raging thirst, and feeling shaky, besides rehydrating with water, taking the liposomal glutathione or NAC mentioned above can be very helpful, as can replenishing your electrolytes with supplements like Opti-Alkaline, or Ener C packets.

Yet, if you've got to go to work or need to keep performing, adaptogens like Rhodiola, Ginseng, Holy Basil, and Ashwagandha (found in Optimum Health's Optimized Adrenal Balance), can be the most useful at this juncture, helping you to offset the effects of the toxicity, feel normal again, and carry on.

And if you ask, "Well why wouldn't I have used those to begin with?” the answer is that such adaptogens will prevent you from feeling the effects of the alcohol, so even when you drink much more you remain largely unaffected! (i.e. It kind of defeats the purpose.)

This is the power of supporting your mitochondrial function...it helps you adapt to all kinds of stressors, chemical or otherwise!

Extensive references on this material are available upon request.

Be well and have fun! 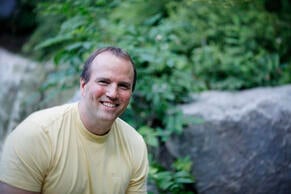